Aberdeen to Sevilla and first day to Calera de León

I got up just before 1am. Strange how you can anticipated an alarm about to go off. I was ready to load the car but hungry so had a good breakfast. Before going outside. Visibulty was 10 yards and it stayed that way for 50 miles. I had to go slowly but I was not in any danger of falling asleep. As there was next to no traffic I stayed in the middle of the road so felt safer.

I arrived at the park and ride after the bus I intended to take but the next one was ok for time. I needed yet another meal of bacon, sausage, egg and spiced beans so I’m ashamed to show it. Easily caught the plane which arrived early before 10am. As the queue for the bus was several buses worth, arrived too late in Sevilla bus station for an even earlier bus to Monesterio. Had a small paella 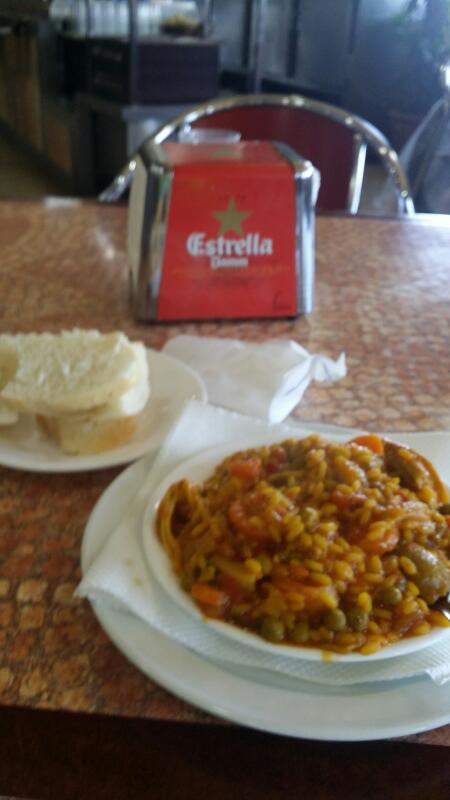 while waiting. The bus left on time but arrived late, and before I got the bike ready, I was almost an.hour behind and very tired. I soon got a secod wind but when I arrived in Calera de Leon I’d only done less than 8km and 150m but I’d been on the go for 16 hours and when I saw there was accommodation I was happy to sit with a beer rather than keep going. 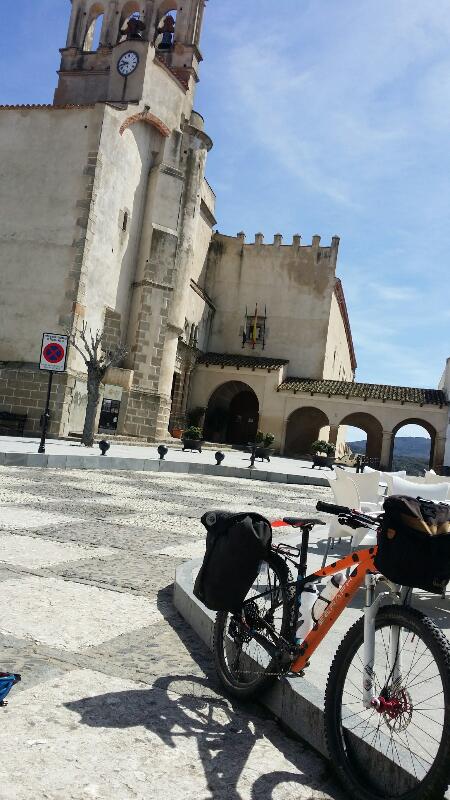 Church outside the bar.

A hot shower And some time spent repacking everything meant it was time for an evening meal. I had a large plate of chorizo 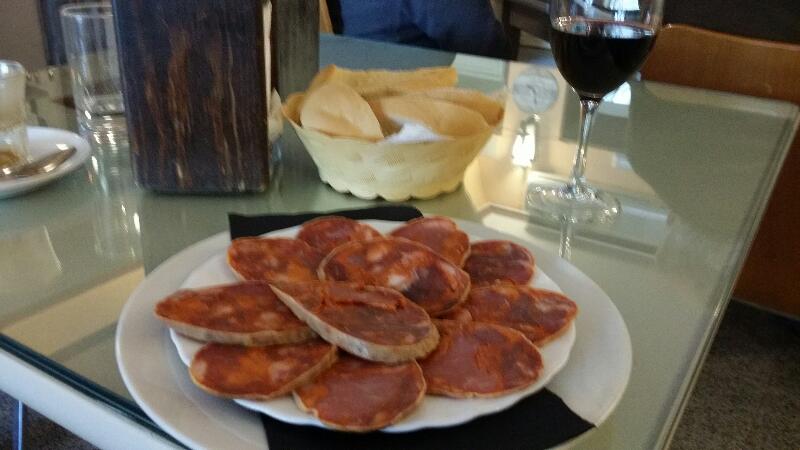 while watching bullfights but I can’t understand or see the point. Why did the bill survive after someone fluttered a red hanky? It was for me more entertaining than a football match but I do find these things disturbing: the similarity of a matador to a strutting peacock, the overenthusiastic crowd and the television concentrating on the day’s heros when a less than successful matador makes repeated mistakes. Weird.

I discovered that since last year I can’t see sd cards or connect as mass storage to my android. An hour and I still could not defeat the ‘safety system’ stopping me. Annoying. Can’t see the photos other than on my smartphone. I need to find ways to do that as I won’t be able to post tracks, or photos from camera or Gopro.

So the first day has had all the usual events, a short journey, an inability to blog quickly, a realization that I can’t speak Spanish.

Even the short cycle was enjoyable, there had been.n lots of rain but the mud was not a foot deep in the interesting countryside, the evening was excellent, so a good start to the journey.